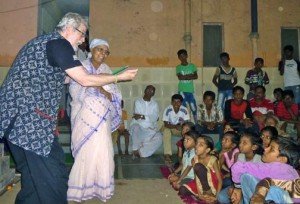 Tom recently returned from a two week trip to India. He travelled with Janet’s mime teacher, Chris Yerlig. Chris is from Great Britain and has performed and taught mime full-time for the last 20 years. The first week Chris and Tom performed a dozen shows in orphanages, hospitals, centers for the mentally ill, and their final show was in an Ashram that cares for cancer patients.

The Ashram show was a most memorable performance. People with cancer living in the surrounding villages come into Mumbai and stay at the Ashram while they’re receiving treatments. The monks provide meals, a place to stay for the patient and their family, and transportation to and from treatments. Morning and evening the patients also participate in puja (Hindu religious service) in the Ashram temple. Tom and Chris did their magic and mime performance in the temple for about 300 people. Particularly moving moments were seeing worried parents smiling at their sick child, suddenly full of laughter and delight as they participated in the magic show.

As soon as the show finished puja began in the temple. This was Chris and Tom’s last performance. As they sat there amid the chanting and incense, the offerings and bells, they were filled with memories of their 12 shows and it was a particularly wonderful way to bring their tour to a close.

This entry was posted in Featured News. Bookmark the permalink.
← Blessed in Bogota
Our Children: A wonderful partner in India →