Since 2003 we have traveled to over 30 countries bringing love, laughter, magic and hope to hundreds of thousands of refugee and orphan children in many of the most war-torn parts of the world. We have performed in Sudan, Somalia, Ethiopia, Bosnia, Burma and Bangladesh and many other countries where war or natural disaster have stranded people for decades in isolated, often desolate refugee camps or orphanages.

What good is entertainment to a refugee or orphan child or adult who desperately needs food, shelter and clothing. An Afghan elder we met in a refugee camps on the Iran-Afghan border answered this important question. After we had performed two shows in the camp mosque for 500 girls and then for 500 boys, we were having tea with this Afghan elder and he said. 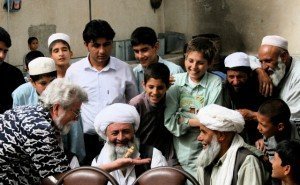 “The International relief agencies take good care of us, they provide us with food, shelter and clothing. But sometimes I think they see us as only bodies. In the seventeen years I have lived in this refugee cams, you are the only entertainers who have come here. But you came and today you fed the minds and imaginations of our children and they will be thinking and talking about this magic show for months. Thank you very much for what you have given to us. God bless you and please come again.”

This Afghan elder expressed the entertainment part of our mission as well as anyone could have.

When we are in some terrible place —an abandoned factory serving as a shelter after Hurricane Katrina, a school in the massacred town of Srebrenica in Bosnia or a refugee camp with 30,000 men, women and children stranded for 20 years on the Ethiopian-Sudan border—and we have a crisis of faith in the healing power of magic and laughter, we remember that Afghan elder’s words. We remember again the power of magic to awaken hope. Houdini once said,

“In certain circumstances, magic not only amazes and amuses but it has the power to awaken hope that the impossible is possible.”