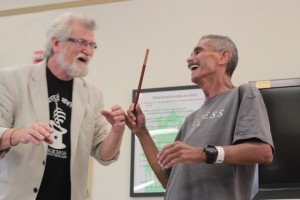 On this special day honoring our Veterans, we would like to formally announce two new projects. For ten years, Magicians Without Borders has been performing magic for forgotten peoples around the world. Since 2011 we have felt increasingly called to work with another often forgotten group of people, our veterans.

In June of 2012 we performed in 12 VA hospitals and centers in and around New York City. We would like to announce today two new projects, a Performance Tour of all 42 New England VA hospitals and centers for veterans and the Warrior Wizard Project.  We’ve been training children in India, El Salvador and Columbia to be magicians. Now, we would like to recruit a group of veterans and commit ourselves to working with them for three years, training them to become Warrior Wizards. They will then perform in VA hospitals all across the country. These two new projects embody our mission of using magic to entertain, educate and empower.

For a more detailed description of these new projects click here.

This entry was posted in Featured News. Bookmark the permalink.
← Plans for the Immediate Future
Greetings from Bogota →