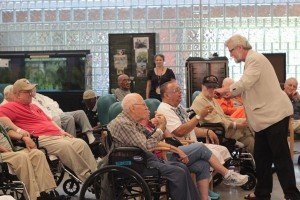 Over the past year, we have felt a calling to work with U.S. Military Veterans. Increasingly, these men and women feel like another forgotten population of people who are victims of war and are now trapped in VA Hospitals across the country. In June 2012 we did a tour of twelve VA Hospitals in and around New York City. This was a very powerful, moving and memorable experience.

When we arrived at the hospitals, most of the men (and usually a couple of women) were generally slumped in their wheel chairs, half awake and looking rather wasted. We would greet them enthusiastically, tell them we were going to do some magic for them…this perked them up a bit, but only a bit. We set about getting the show ready in front of them…and moving around the room saying hello and learning peoples’ names. Meet and greet.

The show is high energy and enthusiastic –engaging as many people as possible in every trick. We get folks to come up and help. Getting them to do the magic, to be the magic –hold a magic wand, say a magic word, anything they are willing and able to do. Even if this is a little awkward and difficult –working with folks in wheelchairs and walkers, stoke victims or amputees, some unable to speak or move… getting them as involved as possible is very important for us. Relating with them as normal people, is important for me –and I think important and healing for them.

We move around the room during the show, engaging everyone, calling them by name. Gradually the room awakens and comes alive. Laughter and comments begin to be heard. The awakening, healing power of magic begins to happen. I have seen this in a room of sullen, sad, angry victims of Hurricane Katrina or children who have lost everything, including their parents, from the Southeast Asia Tsunami. The folks in the audience come alive again in some new way. This is the real magic–this is turning tricks into Magic. This is the healing power of magic.

The magic touched the staff and patients alike. Here are a couple of quotes:

“Wow. You just left and I had to contact you immediately about how fantastic the Magicians Without Borders show was for our Veterans. You engaged some of the most severely withdrawn and elderly residents who were hanging on your every trick. This was very special and out of the ordinary to have you here and I want to extend my sincere gratitude. We hope you can come again. Let’s stay in touch.”

“In the middle of the show I found myself back in Vietnam then my mind and heart were touched by the magic and my terrors were turned into happiness. I was amazed. This has never happened before. Thank you.”

“Magic is great for these guys; it allows them to see possibilities they never thought were possible. Magic can give them hope because they see the impossible happening right before their eyes.”

This entry was posted in Featured News, Our Travels. Bookmark the permalink.
Plans for the Immediate Future →