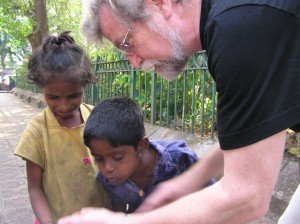 Since 2005, in addition to entertaining refugee and orphan children around the world, we have been training children in El Salvador and India to become magicians. We have a dream that some of these young magicians will someday travel with us to refugee camps and orphanages. A number of the young El Salvadoran magicians have already begun to make this dream a reality by traveling three times to the Highlands of Guatemala and performing magic for ten thousand Mayan children in the villages around Lake Atitlan (link to Miracle at Valle de Norte) .

Our education mission began when we first went to El Salvador in January 2005 to perform in Preschools set up by the rural health organization, Asaprosar, (www.asaprosar.org). After twenty performances in the remote villages around the city of Santa Ana, the founder and director of Asaprosar, Dr. Vicki Gusman, asked if we would be willing to teach some magic to a group of children who had been living in a garbage dump and in the marketplace in Santa Ana. These children were participants in Asaprosar’s Barefoot Angel Program. They were now in school and doing very well. Dr. Vicki thought that learning a few magic tricks would be a wonderful reward for the fine work these children had done in school. We spent a day with about a dozen boys and girls teaching them a half dozen magic tricks. At the end of the day one of the boys, Jaime Zumba asked, “When are you coming back?” We had made no plans to come back. We stopped and thought about it and said, “How about May?” “Great,” Zumba and a number of the others shouted. 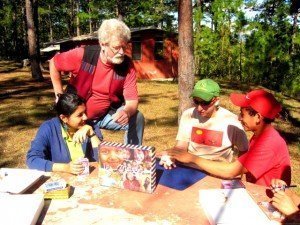 Since 2005 we have gone to El Salvador every three months to perform and teach. We have a Theater Art and Magic Camp for fifty children, which we have hosted every January since 2007. Zumba was hired in 2012 by Magicians Without Borders to teach a third generation of magicians four days a week at two Barefoot Angel centers run by Asaprosar.

We started a similar program in August 2010 in Mumbai India collaborating with an organization Prerana (www.Prerana.org), which is committed to putting an end to second generation sexual trafficking. All of our students are the children of sexually trafficked women who work in the brutal brothels in Mumbai’s red light slums. Without guidance and support, 70% of these children will end up in the sex trade.

“The magic students take great pride in performing magic, and form a positive outlook on life that is palpable. We have seen many of our children bloom and grow so beautifully since they have been studying magic.”

These children from the red light slums often sleep in abandoned buildings, stables, or under the beds in brothels. They live unspeakable lives but are now beginning to grow in marvelous ways and dreams of better lives are starting to awaken. We will continue to go to India and El Salvador every three months and continue to teach magic, awaken dreams and find ways to make these dreams come true.